Situated in the Montagnac municipality in the lower Hérault Valley, Mas des Tannes is on the site of an ancient sheepfold which used to belong to the Cistercian Valmagne Abbey. Established near one of the rare natural springs from which it takes its name, the estate passed through several hands until its previous owner converted the entire vineyard to biodynamic viticulture in the 1990s. It is spread over 60 ha, of which 36 ha are planted with vines.

Jean-Claude Mas acquired the estate in 2006. It holds a prime location at an altitude of 120 metres, on rolling terrain. It is protected by pine forest and the garrigue (wild scrubland), nurtured by the Mediterranean climate (9 km from the coast) and cooled by the northerly breezes. The clay-limestone soils are rich with organic life and a lush sub-soil which has never been exposed to synthetic products.

The vines are naturally resistant and robust, the grapes concentrated and healthy, the wines balanced and sumptuous. We produce the red and white Mas des Tannes Reserve and the Mas des Tannes Classic Red wines from vines that are 15 to 34 years old, with an average yield of 50 hl/ha and a planting density of 4800 vines per hectare. Peyre Plantade (the Planted Stone) is our iconic plot with its gravelly black clay soils, its south-eastern exposure with a view over the Thau marshes and the Mediterranean Sea. Cabernet Sauvignon, Grenache and Grenache blanc, Mourvedre, Carignan, Syrah, Merlot, Chardonnay, Syrah and Viognier are all organically farmed. Harvests are carried out both by hand and machine and pruned with the Cordon de Royat and Gobelet methods.

The wines are produced and aged in small cement tanks as well as French or American oak barrels. 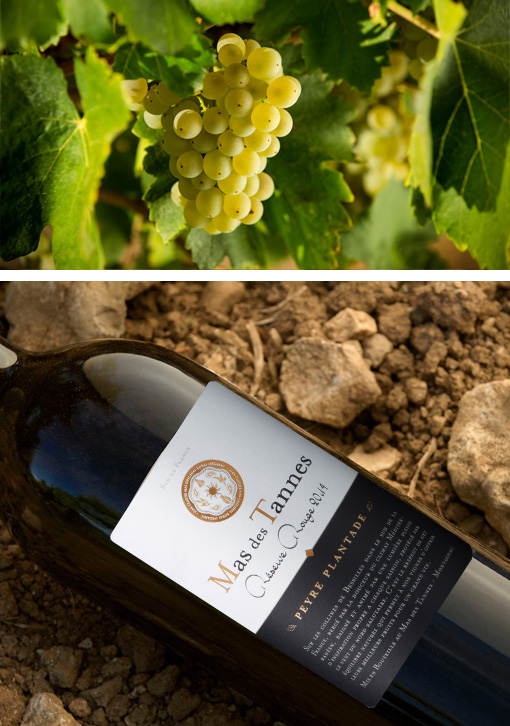 Across the street from Nicole vineyard is Mas des Tannes. Acquired in 2006, it covers 30 hectares. Organically farmed, it is planted with Cabernet Sauvignon, red and white Grenache, Mourvèdre and Carignan. This setting enjoys a privileged situation, well protected and nourished by the healthy wind from the North West.